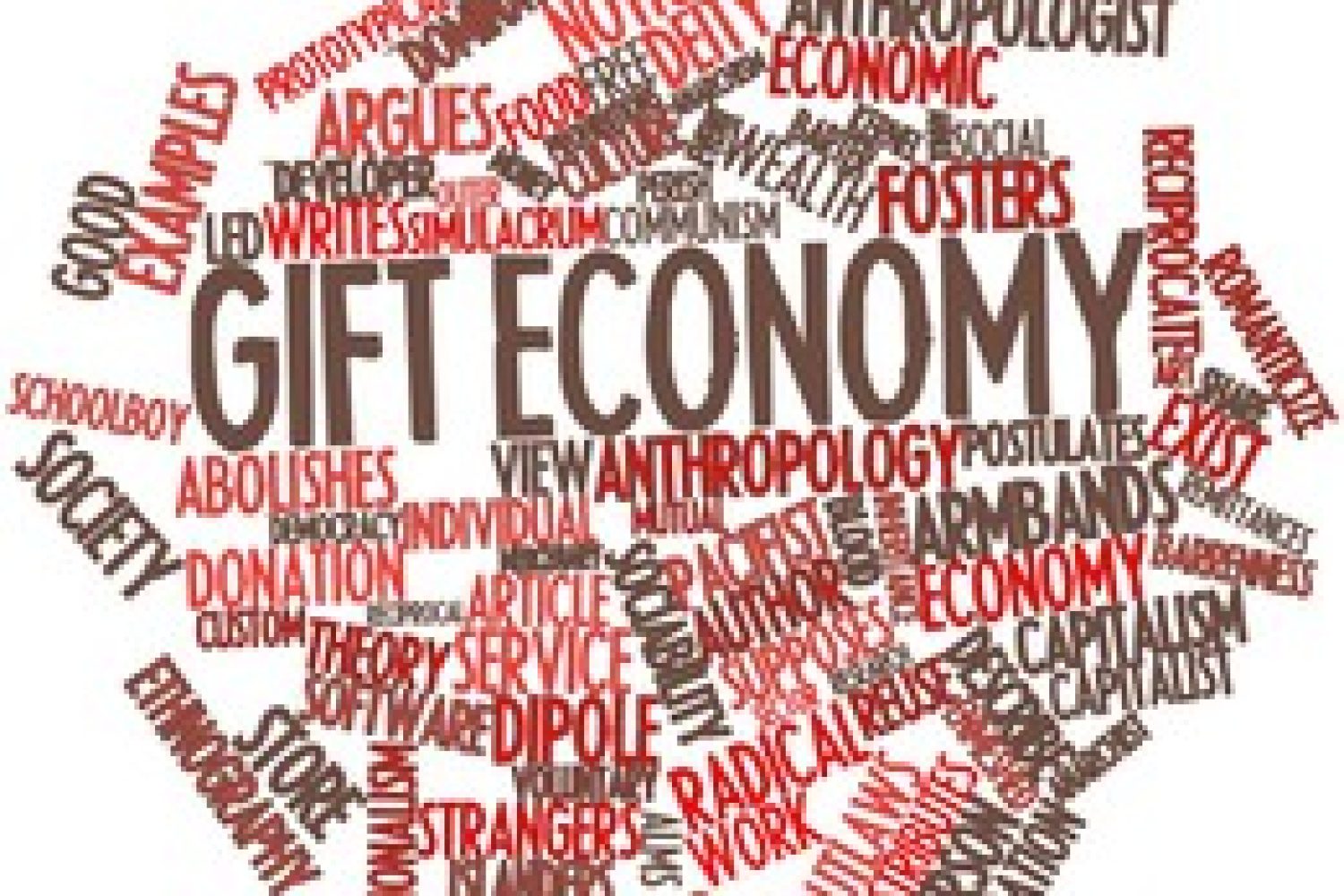 Two basic economic paradigms coexist in the world today. They are logically contradictory, but also complementary. One is visible, the other invisible; one highly valued, the other undervalued. One is connected with men; the other with women. What we need to do is validate the one connected with women, causing a basic shift in the values by which we direct our lives and policies.

I first approached the idea of giving as a basic economic and life principle when I was doing work on language and communication. Later, as a feminist, I realized that in my free homemaking and child-rearing work, I was doing gift labor-as were women worldwide.

The present economic system, which is made to seem natural and too widespread to change, is based upon a simple operation in which individuals participate at many different levels and at many different times. This operation is exchange, which can be described as giving in order to receive. The motivation is self-oriented since what is given returns under a different form to the giver to satisfy her or his need. The satisfaction of the need of the other person is a means to thc satisfaction of one’s own need. Exchange requires identification of the things exchanged, as well as their measurement and an assertion of their equivalence to the satisfaction of the exchangers that neither is giving more than she or he is receiving. It therefore requires visibility, attracting attention even though it is done so often that the visibility is commonplace. Money enters the exchange, taking the place of products reflecting their quantitative evaluation.

This seemingly simple human interaction of exchange, since it is done so often, becomes a sort of archetype or magnet for other human interactions, making itself-and whatever looks like it-seem normal, while anything else is crazy. For example, we talk about exchanges of love, conversations, glances, favors, ideas.

There is also a different type of similarity of exchange to linguistic definition. The definition mediates whether or not a concept belongs to a certain category, just as monetarization of activity mediates its belonging to the category of work or not. The very visibility of exchange is self-confirming, while other kinds of interaction are rendered invisible or inferior by contrast or negative description. What is invisible seems to be valueless, while what is visible is identified with exchange, which is concerned with a certain kind of quantitative value. Besides, since there is an equivalence asserted between what we give and what we receive, it seems that whoever has a lot has produced a lot or given a lot, and is, therefore, some – how more than whoever has less. Exchange puts the ego first and allows it to grow and develop in ways that emphasize me-first competitive and hierarchical behavior patterns. This ego is not an intrinsic part of the human being, but is a social product coming from the kinds of human interaction it is involved in.

The alternative paradigm, which is hidden – or at least misidentified – is nurturing and generally other-oriented. It continues to exist because it has a basis in the nature of infants; they are dependent and incapable of giving back to the giver. If their needs are not satisfied unilaterally by the giver, they will suffer and die. Society has allocated the caretaking role to women since we bear the children and have the milk to nourish them.

Since a large percentage of women nurture babies, we are directed toward having an experience outside exchange. This requires orientation toward interest in the other. The rewards and punishments involved have to do with the well-being of the other. Our satisfaction comes from her or his growth or happiness, not just from our own. In the best case, this does not require the impoverishment or depletion of ourselves either. Where there is enough, we can abundantly nurture others. The problem is that scarcity is usually thc case, artificially created in order to maintain control, so that other-orientation becomes difficult and self-depleting. In fact, exchange requires scarcity because, if needs are abundantly satisfied, no one is constrained to give up anything in order to receive what they need.

It is said that the earth produces enough at the present time to feed everyone abundantly. However, this cannot be done on the basis of the exchange paradigm. Nor can the exchange paradigm or the kind of dominant ego it fosters continue in a situation of abundance and free giving. That is why scarcity has been created on a worldwide scale by armaments spending and other wastes of resources: $17 billion would feed everyone on earth for a year and we spend it every week on the military, thus creating the scarcity necessary for the exchange paradigm to survive and continue to validate itself.

If we identify the gift paradigm with women’s way, we see that it is already widespread, since women arc the majority of the population. Many men practice it to some extent also. Noncapitalistic economies such as native economies, often have major gift-giving practices and various important kinds of women’s leadership.

I believe, for example, that many of the conflicts between women and men that seem like personal differences are really differences in the paradigm we are using as the basis for our behavior. Women criticize men’s big egos and men criticize women as being unrealistic, soft touch. bleeding hearts. Each tries to convince the other to follow his or her values. Recently, many women have begun to follow the exchange paradigm, which has the immediate advantage of liberating them from grim economic servitude – and the psychological advantage that monetarization defines their activity as valuable. But the servitude itself is caused by the exchange paradigm.

As people change from one paradigm to the other, there is probably some holdover of the previous paradigm, so that women who take on exchange often remain nurturing while men who take on giving remain more ego-oriented. I see this in the case of religions, in which men legislate other-orientation, often according to exchange, excluding and disqualifying women. Indeed, they make altruism seem so saintly that it is impractical for the many (while ignoring that it is often the norm for women). This is like the madonna-whore syndrome, where the woman is either over- or undervalued, worshiped or despised. Altruism is made to seem above our reach, often with a self-sacrificing side (because of the scarcity – exchange economy), or seen as wasteful, spendthrift; charity is given by patriarchal religions in exchange for the soul.

The gift giving done by the big exchange ego does not work, as we have seen on the scale of aid between nations. There are strings attached by the donor country, which pauperize the recipients. Another aspect of the conflicts of paradigms is that housework or other unmonetarized women’s labor is seen as inferior, or nonwork; valuing it is subversive to the exchange paradigm. Perhaps women’s labor is paid less than men’s to maintain it in a disempowered gift stance. What we need to do is not to pay women’s labor more, but to change the values altogether, eventually disqualifying monetarization and exchange.

How can a noncompetitive, nurturing paradigm compete with a competitive one? It is always at a disadvantage because competition is not its motivation or its value. Yet it is difficult to not compete without losing, thereby validating the other’s stance. Another major problem is that if satisfying a need is free, one should not require recognition for it. But by not requiring recognition, women have themselves remained unconscious of the paradigm character of their actions and values.

Yet clearly the ego-oriented paradigm is pernicious. It results in the empowerment of the few and the disempowerment, depletion. death, and invisibility of the many Since the ego is a social product, artificial in some ways, it needs to be continually re-created and confirmed. This can also be done by violence against the other, including sexual violence Anyone in the position of the other is ignored, denied, excluded, degraded to confirm the superiority and identity of the dominant egos. I would like to avoid any moral discourse on this point (in fact, I see guilt as internalized exchange, preparing to pay back for the wrong one has done) and simply see the problems as logical and psychological consequences of the paradigms. Vengeance and justice require a balance of accounts. But we need kindness and nurturing, When we find that 85 percent of people in prison have been abused as children, we must realize justice is not the issue. Like charity, justice humanizes the exchange just enough to keep it from changing. We need a world based on giving and for giving, not retribution.

At this point, it seems that it is important to create transitional structures by which giving can be validated. Such strategies as cause-related marketing, where profits are given to social change projects to satisfy needs, use exchange for giving. The social change funding movement also empowers giving especially when it comes from an abundance rather than a scarcity model. But so do all the people in the peace, feminist, healing, and therapy movements who devote their time and energy to satisfying human and social needs. We are doing the right thing, but we don’t know why. Sometimes, we even disparage other-orientation while we arc practicing it, because the exchange model is so pervasive and strong. We need to give our money, time, and attention to the change in values, and both new and traditional economic alternatives not dependent on exchange and the market. Women need to realize that our values and energies are important outside the family as well as inside. Social problems are themselves needs that we must satisfy. Our other-orientation must become the norm.

Then the ancient dream that the powerful will lay down their arms and the rich their goods might come true, led by women of the world. We can, for example, move within the “first world” to forgive-the “third world” debt. I call your attention to the word for-give.

Read more about Gift Economy and Genevieve Vaughan at gift-economy.com

This website uses cookies to improve your experience while you navigate through the website. Out of these cookies, the cookies that are categorized as necessary are stored on your browser as they are essential for the working of basic functionalities of the website. We also use third-party cookies that help us analyze and understand how you use this website. These cookies will be stored in your browser only with your consent. You also have the option to opt-out of these cookies. But opting out of some of these cookies may have an effect on your browsing experience.
Necessary Sempre abilitato
Necessary cookies are absolutely essential for the website to function properly. This category only includes cookies that ensures basic functionalities and security features of the website. These cookies do not store any personal information.
Non-necessary
Any cookies that may not be particularly necessary for the website to function and is used specifically to collect user personal data via analytics, ads, other embedded contents are termed as non-necessary cookies. It is mandatory to procure user consent prior to running these cookies on your website.
ACCETTA E SALVA